This is a new series I'm starting on my blog called "I'm Currently Reading...".  This is kind of self explanatory - I'll post a summary and my thoughts and opinions on the book I'm reading as I read it.  It's a sort of continuing review, until I'm completely done with the book.  Feel free to jump in and read the same book at any time - you can always read the previous parts of the review later after you have read that section.  So, here we go! 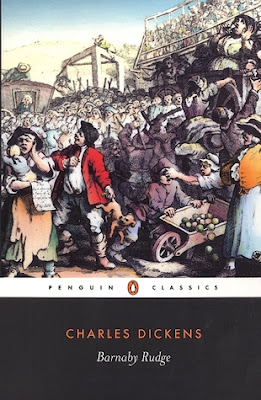 This is the version I'm reading.

Chapter the First – Chapter the Tenth:  I have been reading Barnaby Rude on and off for a few weeks now, and I’ve generally been trying to get library books during the summer because I was saving the books I own to read at my leisure when I’m busy with college this fall.  But I’ve gotten a bunch of books at the beginning of the season, so the fact that I’ve totally gotten into Barnaby Rudge (plus the unforeseen hectic family schedule) has not bothered me that much.

The first pages of the book were a little hard for me to get into because it started with a description of the Maypole (an inn), and the a few guys talking there.  We’re introduced to some of the main characters, though – John Willet, the owner of the Maypole, and his son Joseph (commonly known as Joe).  A stranger comes into the inn and is asking about a man and girl who are revealed to be Mr. Geoffrey Haredale and his niece Miss Haredale.  Solomon Daisy, a man at the inn, is instructed by John to tell the mystery surrounding the murder of Mr. Geoffrey Haredale’s older brother, Reuben, and the murder of the steward Mr. Rudge.   The suspected killer (of both Reuben Haredale and Mr. Rudge, I believe) is the missing gardener, who no one has heard from since. I didn’t realize this until later chapters, but this whole story is I think turning out be a big part of the story.

The next character introduced is Gabriel Varden, a good natured locksmith who happens to meet the stranger earlier mentioned on the road.  This stranger is in no mood to talk, and tells Gabriel that he (Gabriel) has never been closer to death than the very second they met on the road.  After Gabriel reaches the inn, Solomon informs Joe that “I wish he [the stranger] may be an honest man.”  What follows is a kind of humorous conversation with Joe and a few others, which I think shows the characters of Joe and John rather well:

“ ‘So we all do, I suppose, don’t we?’ observed the locksmith.
‘I don’t,’ said Joe.
‘No!’ cried Gabriel.
‘No.  He struck me with his whip, the coward, when he was mounted and I afoot, and I should be better pleased that he turned out what I think him.’
‘And what may that be, Joe?’
‘No good, Mr. Varden you may shake your head father, but I say no good, and will say no good, and I would say no good a hundred times over if that would bring him back to have the drubbing he deserves.’
‘Hold your tongue sir,” said John Willet.” – Barnaby Rudge by Charles Dickens, p. 30

That tickled me, because it seems like something a twenty-something boy would say.  I get the impression that Joe is a rebellious, intelligent, proud boy who exhibits signs of almost foolishness from his own sense of capability shrouded in inexperience.  His father John, from the argument in Chapter the Third, picks up on this characteristic in his son and is therefore reluctant to allow Joe to spread his wings – but which came first?  Is Joe this way by nature, or has John labeled his son as this way so John himself would always be in control and never threatened by the hypothetically capable Joe, thus creating a somewhat “self-fulfilling prophesy”?  I’m interested to see this relationship between these two play out.

Next we meet Barnaby Rudge himself, a young simpleton, who is standing by a supposedly dead man’s body.  Barnaby says he knows who this “dead” man is but when Gabriel investigates, the man is just knocked out.  He and Barnaby take the invalid to a house somewhere.  For some reason I had in my head that Barnaby would be some white haired, political old man like Benjamin Franklin or something.  Imagine my surprise when I learned he was a skinny, young, half-there ginger. 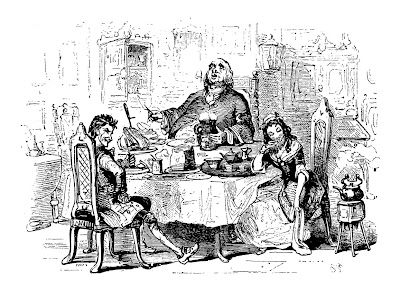 The next two characters introduced are Dolly Varden (Gabriel’s daughter) and Simon Tappertit (Gabriel’s apprentice).  It is obvious Sim (Simon’s nickname) is in love – or should we say lust? – with Dolly:

“Fathers should never kiss their daughters when young men are by.  It’s too much.  There are bounds to human endurance.  So thought Sim Tappertit when Gabriel drew those rosy lips to his – those lips within Sim’s reach from day to day, and yet so far off.  He had respect for his mast, but he wished the Yorkshire cake might choke him.” - Barnaby Rudge by Charles Dickens, p. 43.

Sim is a trip.  He is  “very little more than five feet high, and thoroughly convinced in his own mind that he was above the middle size; rather tall, in fact, than otherwise.”  He also thinks very highly of himself and “…with his legs, which, in knee breeches, were perfect curiosities, of littleness, he was enraptured to a degree amounting to enthusiasm.”  It’s also obvious that Sim is jealous of Joe, who Dolly seems to be somewhat sweet on.  Sim’s reaction to Joe actually had me laughing out loud:

“It was not until he had several times walked up and down with folded arms, and the longest strides be could take, and had kicked a great many small articles out of his way, that his lip began to curl. At length, a gloomy derision came upon his features, and he smiled; uttering meanwhile with supreme contempt the monosyllable ‘Joe!’
‘I eyed her over, while he talked about the fellow,’ he said, ‘and that was of course the reason of her being confused. Joe!’
He walked up and down again much quicker than before, and if possible with longer strides; sometimes stopping to take a glance at his legs, and sometimes to jerk out, and cast from him, another ‘Joe!’ In the course of a quarter of an hour or so he again assumed the paper cap and tried to work. No. It could not be done.
‘I’ll do nothing to-day,’ said Mr. Tappertit, dashing it down again, ‘but grind. I’ll grind up all the tools. Grinding will suit my present humour well. Joe!
Whirr-r-r-r. The grindstone was soon in motion; the sparks were flying off in showers. This was the occupation for his heated spirit.
Whirr-r-r-r-r-r-r.
‘Something will come of this!’ said Mr. Tappertit, pausing as if in triumph, and wiping his heated face upon his sleeve. ‘Something will come of this. I hope it mayn’t be human gore!’
Whirr-r-r-r-r-r-r-r.” - Barnaby Rudge by Charles Dickens, pp. 47 and 49.

Later Gabriel is at Barnaby’s mother’s house – the mother’s name is Mary.  There has apparently been some stranger that Gabriel does not know who has been frequenting the house, and I think Mary is reluctant to tell him.  This whole part was a little confusing to me, because I can’t tell if the stranger that hurt Edward (the  man Barnaby and Gabriel found) on the road was the same one that has been coming to Mary’s house.  I think that may be part of the mystery?  Anyway, there’s something fishy going on there.

The next two characters introduced are Mrs. Martha Varden and her servant Miss Miggs.  My land…Mrs. Varden is the most annoying person in the world.  She’s whiny, selfish, self-absorbed, and talks “God speak”.  Mrs. Varden is the primary example of the type of Christian no one desires to be.  Miggs is kind of funny, but annoying as well.  She reminds me of Wiggins from Pocahontas, for no really apparent reason.

We also find out that Simon is part of a club of apprentices who dislike their masters.  Because Simon is captain, he instructs the group of secondary characters to be mean to Joe.  This club Simon is head of is a secret, but Miggs discovers he is out of his workshop and decides to wait up for him.  She harasses him for a while, and then the scene switches to the Maypole where a Mr. Chester has come to stay.  He is Edward’s father.  Hugh, a pretty important character, is also introduced here but he doesn’t play much of a role yet.   Mr. Chester requests that a message be sent to Mr. Haredale, and Barnaby delivers the message as well as carries backs one from Mr. Haredale.  This is the end of Chapter the Tenth.

I’m actually pretty far ahead of this part in the book now, but I thought Chapter the Tenth (I love the way these chapters are named) would be a good place to stop.  By this part of the book, I was totally into it.  My favorite characters so far are Dolly, Joe, and Sim, and I’m definitely interested to see all that happens next.

Picture from Google Images.
Posted by Lydia at 11:45 AM