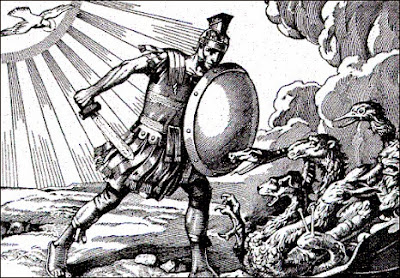 I ran across this sermon about Christian soldiers by Charles Spurgeon.  I thought I'd share my favorite part, because it's very inspiring.


"Paul does not appear to have pictured true believers as sluggards sound asleep upon the downiest beds; his description of a Christian in the text is that of a soldier, and that means something very far different either from a religious fop, whose best delight is music and millinery, or a theological critic who makes a man an offender for a word, or a spiritual glutton who cares for nothing but a lifelong enjoyment of the fat things full of marrow, or an ecclesiastical slumberer who longs only for peace for himself. He represents him as a soldier and that, I say, is quite another thing. For what is a soldier? A soldier is a practical man, a man who has work to do, and hard, stern work. He may sometimes when he is at his ease wear the fineries of war, but when he comes to real warfare he cares little enough for them; the dust and the smoke, and the garments rolled in blood, these are for those who go a soldiering; and swords all hacked, and dented armor, and bruised shields, these are the things that mark the good, the practical soldier. Truly to serve God, really to exhibit Christian graces, fully to achieve a life-work for Christ, actually to win souls, this is to bear fruit worthy of a Christian. A soldier is a man of deeds, and not of words. He has to contend and fight. In war times his life knows little of luxurious ease. In the dead of night perhaps the trumpet sounds to boot and saddle, just at the time when he is most weary, and he must away to the attack just when he would best prefer to take his rest in sleep. The Christian is a soldier in an enemy’s country always needing to stand on his watchtower, constantly to be contending, though not with flesh and blood, with far worse foes, namely, with spiritual wickednesses in high places.


The Christian is a self-sacrificing man as the soldier must be. To protect his country the soldier must expose his own bosom; to serve his king be must be ready to lay down his life. Surely he is no Christian who never felt the spirit of self-sacrifice. If I live unto myself I am living unto the flesh, and of the flesh I shall reap corruption. Only he who lives to his God, to Christ, to the truth, to the church, and to the good old cause, only he is the man who can reckon himself at all to be a soldier of Jesus Christ.


A soldier is a serving man. He does not follow his own pleasure; he is under law and rule; each hour of the day has its prescribed duty; and he must be obedient to the word of another and not to his own will and whim. Such is the Christian. We serve the Lord Jesus Christ. Though no longer the slaves of man so as to dread his frown, we are servants of Christ who has loosed our bonds.


The soldier is full often a suffering man. There are wounds, there are toils, there are frequent lyings in the hospitals, there may be ghastly cuts which let the soul out with the blood. Such the Christian soldier must be ready to suffer, enduring hardness, not looking for pleasure of a worldly kind in this life, but counting it his pleasure to renounce his pleasure for Christ’s sake.


Once again, the true soldier is an ambitious being. He pants for honor, seeks for glory. On the field of strife he gathers his laurels, and amidst a thousand dangers he reaps renown. The Christian is fired by higher ambitions than earthly warrior ever knew. He sees a crown that can never fade; he loves a King who best of all is worthy to be served; he has a motive within him which moves him to the noblest deeds, a divine spirit impelling him to the most self-sacrificing actions. Thus you see the Christian is a soldier, and it is one of the main things in Christian life, to contend earnestly for the faith, and to fight valorously against sin.


Paul does not exhort Timothy to be a common, or ordinary soldier, but to be a “good soldier of Jesus Christ;” for all soldiers, and all true soldiers, may not be good soldiers. There are men who are but just soldiers and nothing more; they only need sufficient temptation and they readily become cowardly, idle, useless and worthless; but he is the good soldier who is bravest of the brave, courageous at all times, who is zealous, does his duty with heart and earnestness. He is the good soldier of Jesus Christ who, through grace, aims to make himself as able to serve his Lord as shall be possible, who tries to grow in grace and to be perfected in every good word and work, that he may be in his Master’s battles fit for the roughest and sternest service, and ready to bear the very brunt of the fray. David had many soldiers, and good soldiers too, but you remember it was said of many, “These attained not unto the first three.” Now Paul, if I read him rightly, would have Timothy try to be of the first three, to be a good soldier. And surely I would this morning say to my dear comrades in the little army of Christ meeting here, let each one of us try to attain unto the first three; let us ask to be numbered among the King’s mighties, to do noble work for him and honorable service, that we may bring to our Master’s cause fresh glory. Be it ours to covet earnestly the best gifts, and as we have had much forgiven, let us love much, and prove that love by signs following.


Before I proceed fully to open up this metaphor, let me say that though we shall use military terms this morning, and stirring speech, it should ever be recollected that we have no war against persons, and that the weapons which we use are not such as are forged for the deadly conflicts of mankind. The wars of a Christian are against principles, against sins, against the miseries of mankind, against that evil one who has led man astray from his Maker, against the iniquity which keeps man an enemy to himself; and the weapons that we use are holy arguments and consecrated lives, devotion and prayer to God, and teaching and example among the sons of men. Ours is battling for the peace, and fighting for rest. We disturb the world to make it quiet, and turn it upside down to set it right; we pull down strongholds that they may not pull down the Zion of God; we dash down the mighty that the humble and the meek may be established....."